Hilary Bryanston shares some of the the stories and experiences which have inspired her artwork.

From the Cave to the Sea 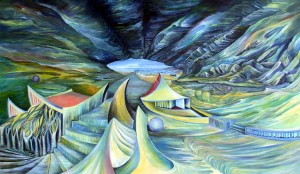 From the Cave to the Sea

(From the series Gates, Places, and Maps)

Painted in 1995, this is one of the pictures that I produced whilst I was undergoing hypnotherapy treatment for migraine.  Oddly, the treatment did nothing to shift the migraine, yet removed completely a creative blockage that I was suffering from at the time.  Thus I emerge slowly up the steps of the underworld and into the light by the sea.  This later became true when I moved from the city to the countryside in 1996. 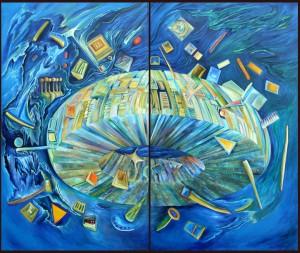 Painted in 1996 – the year that I relocated from a Victorian town house in Birmingham to a remote cottage on the side of a mountain near to Pontardawe in South West Wales.

Thus the picture anticipated the turbulence of moving home, studio and workshop.  Yet it is also about the idea of the spaceship.

This one travels and possibly rotates through air, space, water and time.  The panels within the ship appear to open and shut and shift around like a rubic cube.  The whole ship is in motion – a vehicle to other realms.  Alien beings are represented on the upper left by six ‘figures,’ standing alongside one another. 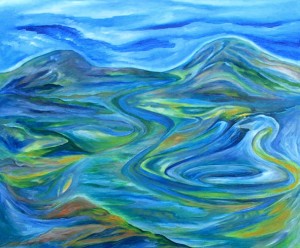 The Mountain is Fluid

The Mountain is Fluid

I don’t think that I could have painted this picture unless I was surrounded by quarries.  Some of them are open cast areas which have never been restored.  The idea that the mountain is not as solid and impenetrable as it might first appear becomes as accessible fact.  To the owners of the quarry, the earth’s resources are totally fluid – to be spooned out like honey for material gain.

This is the first figure out of a series.  It was originally conceived as a ‘companion’ or ‘protector’ for the Lady of the Lake, who became disenchanted with her husband the farmer who physically abused her.  So it is a kind of continuation of the legend of LLYN-Y-FAN-FACH.

The terracotta figures work best as a group, with solid forms giving gravity and mass, and an earthy terracotta red energy. 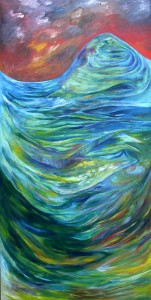 Winter Walk on the Cribarth

Winter Walk on the Cribarth

It was the day before Christmas Eve, I think, in 2008.  As it was a very clean, sunny day with a real bite in the air, I decided to go for a walk up the Cribarth.  This is a very strangely shaped mountain, known locally as the ‘Sleeping Giant.’  There are stunning views of its amazing silhouette from the road that leads past Abercraf and onto Brecon.  [As photographed by Ian Glendenning]

The walk was totally deserted – I could hear my own footsteps.  As I left the woods and started to glimpse the rocky outcrops higher up, I had a very odd sensation.  I lost some time.  One minute I was on my way up; the next, I was walking speedily down the old railway track towards the woodland.  It was getting late and there was only just about enough light to pick my way through the woods.  I felt quite shaken.  I’m not at all sure exactly what happened up there, so I decided to paint this picture.  This is really an early Portal Picture, as I felt on my walk that I had entered another dimension. 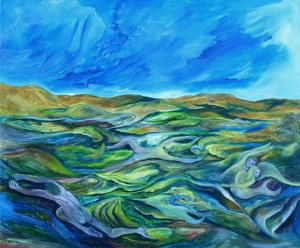 Painted during the harsh winter of 2009, these figures look perfectly at home in a mild climate!  As I was completely isolated, living down a long farm track – impassable in snow – perhaps this provided the external conditions necessary to produce paintings of this kind of intensity.

The central figure (a mermaid) tells the viewer that this is really fiction – as she sits unconcerned and totally wrapped up in a book.  The book, of course, gives the stories about the paintings of angels with mermaids and the tale of the rather disparaging figure on the left who, like the narrator, appears to be alone.

The Computer and the Red Field 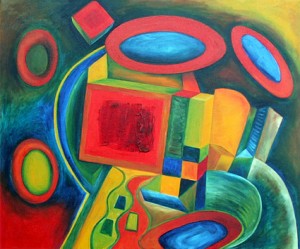 Another picture painted whilst being snowed in at my remote cottage for more than tendays  in the winter of 2010.   The computer itself is a kind of portal which has the means to transport the user through time and space into other dimensions and worlds.  The ‘buttons’ that swirl around the monitor are sometimes with and sometimes without centres.  The monitor itself displays a completely abstract image that resembles a Red Field Painting.  On the bottom right is an arena-like space with a ‘wall of death’, yet there appears to be no audience. 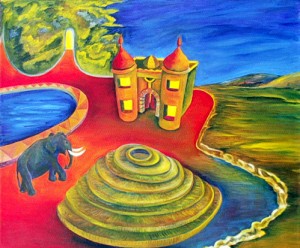 The elephant has everything it needs.  A pond to bathe in, a mound to climb, a brightly lit palace, and a vast, grassy meadow.  There are even distant hills and a maze garden in a thicket.

Yet the palace is also a gatehouse impossible to pass through; the labyrinth is lit up and enticing, yet it is a safe place to go.  The plain is vast, but where does it lead to?

A Painting for Jean Genet

A Painting for Jean Genet

Jean Genet was an inspired writer.  I discovered that Jean Cocteau and Jean Paul Satre campaigned to have him released from his life sentence in jail.  I read some of his books and plays, and when I painted this picture, I realized that the imagery was coming from Genet’s book, Our Lady of the Flowers.

This is the right vehicle to use when passing from one kind of portal to another. 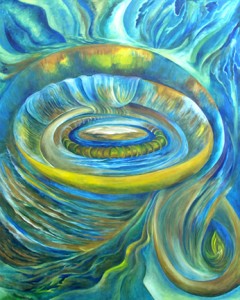 I was thinking of the artist as alchemist when I painted this picture.  I needed a crucible and so I created one.  The bracelet-like shape resembles a Celtic torque.  The jeweller is absent.  The viewer becomes the jeweller.

And so the picture is also about the act of painting itself: the heat, the fire, the steam; the bending and shaping of metal; the hewing of rock.

In the bottom right-hand corner burns the eternal flame.  I thought of this as the fire of creativity.  It is also a cave and a symbol of femininity.

Hilary Bryanston is included in this recent (2015) publication:

SEE HILARY’S WEBSITE (www.hilarybryanston.co.uk) FOR MORE IMAGES AND DETAILS OF WORKSHOPS AND EXHIBITIONS.