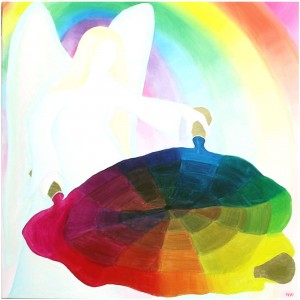 MAGENTA has some unique and mysterious properties.

In 1859 the colour MAGENTA was named, from the location of a battle in Italy.  It was transparent, but fugitive (it would fade).  It was also called Solferino.

Don Jusko describes Magenta as being the color that Nature herslf splits in two: Warm and Cool Magenta.  Thanks to Don for these interesting facts about Magenta, as shown on his website www.realcolorwheel.com, where much more detailed colour information can be found.

MAGENTA does not show up in the Electro-Magnetic Spectrum, which depicts the visible colours when white light is shone through a prism.  The MAGENTA wave is hidden within the violet frequency.  However, if a second prism is placed so that its projected bands of coloured light cross those of the first prism, at the point where the red of one spectrum crosses the blue of another, a MAGENTA patch can be seen.

MAGENTA is a psychological colour, produced in your mind when the eye receives blue and red light in the same area.

The EM wavelengths of colour are in a line, and so they never overlap to reveal the hidden colour MAGENTA.

In an oil slick, the prism is distorted, and the MAGENTA colour becomes visible.

MAGENTA can be seen with the naked eye at the edges of the red and violet bands of a rainbow. 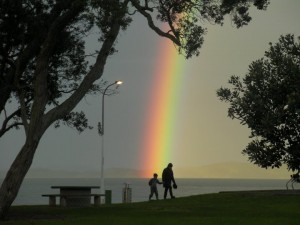 The Evolution of Colour

The ‘Sleeping Prophet’, Edgar Cayce, wrote in his essay AURAS: An Essay on the Meaning of Colour that our eyes seem to be gradually gaining in power, and imagined an evolutionary step for the future of mankind when everybody would be able to see auras:

“Where do colours come from, and what makes them shift and change?  Well, color seems to be a characteristic of the vibration of matter, and our souls seem to reflect it in this three-dimensional world through atomic patterns.  We are patterns, and we project colors, which are there for those who can see them.

In his remarkable book, Pain, Sex, and Time, Gerald Heard, speaking of the evidence for the evolution of consciousness, points out that our ability to see colours is expanding.  The easiest color to see, as you know, is red.  At that end of the spectrum the waves of light are long.  At the other end, where the blue runs into indigo and violet, the waves are short.  According to Heard, who is a reliable scholar, our ability to see blue is very recent.  Natives who live on the Blue Nile in Africa do not know it by that name.  Their title for it, when translated, means brown.  Homer, all through the Iliad and Odyssey, describes the Mediterranean as the “wine-dark sea.”  Mr. Heard says that apparently Homer caught “the slight tinge of red in the purple of the Mediterranean,” but did not see its predominant blue.  Aristotle, moreover, said that the rainbow had only three colours: red, yellow and green.” 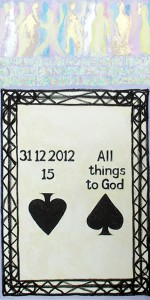 All things to God, by Nicola Wendrich

Nicola dreamed that from the end of the year 2012, people would be able to see more, including colours that we currently do not see.  Please click on the painting for a fuller description of the dream.  In a subsequent meditation Harry was shown that in the future there will be eight visible rays of light instead of our present seven.  Magenta will be the eighth ray.  It is a colour with a feninine frequency, and a frequency of  Love and healing.   Magenta is the complementary colour of Green and is thus associated with the Planet Venus, and the Empress card of the Tarot.

“What will it mean to us if we make this next evolutionary step?  Well, it will mean that we can see auras.  What will this mean?

A friend’s  example:  Whenever a person, whether it be a stranger, an intimate friend, or a member of my family, decides to tell me an untruth, or to evade a direct and frank answer to a question of mine, I see a streak of lemony green shoot through his aura, horizontally, just over his head.  I call it gas-light green,  and I have never known it to fail as an indication of evasion and falsification.

Imagine what that will mean – everyone able to see when you plan to tell them a lie, even a little white one.  We will all have to be frank, for there will no longer be such a thing as deceit!” (Cayce; Auras; p.8; A.R.E. Publications)

Nicola also dreamed (December 2011) that the world would be bathed twice in Magenta-coloured light, and then a new Light would shine in the sky, streaming white light upon people who were celebrating its presence.  On 22nd June, 2015, the following photograph was taken from the International Space Station, and published on the web. 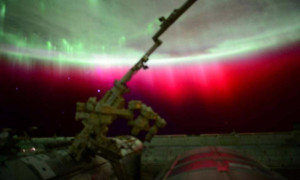 A photo of a red aurora around the Earth, as tweeted by the astronaut Scott Kelly from the International Space Station on 22nd June, 2015. Photograph: @stationcdrkelly/Twitter

We had an unusual and rather magical experience concerning the colour Magenta.  Harry had been working upon a series of paintings depicting the Sephiroth of the Tree of Life.  In the ‘Geburah’ painting he pictured the Egyptian godform Horus, using a ground colour of Cadmium Red Medium, with a flashing colour of green.  Usually an oil painting takes around a couple of weeks to dry, if no drying medium is added to the paint, and if the paint is not thickly applied.  Sometimes, in cold weather, it takes a little longer.  We usually allow at least six months to pass before applying a coat of varnish to protect finished canavasses.  But in the 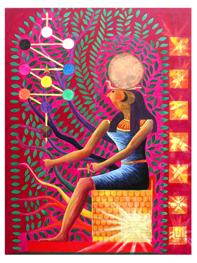 case of the Geburah painting, we hung the canvas for TWO YEARS in a heated room, and the red paint would not dry.   At this point, we discovered Don Jusko’s colour wheel research, and decided to paint over the still tacky Geburah canvas with a ground colour of Magenta, using Phthalo Green as the complementary colour, and adjusting the colours of the Tree of Life diagram within the painting.  The effects of the flashing colours were much more powerful, and the painting dried within a few days!

Magenta in the Judgement Key

When we began painting the Golden Dawn Temple Deck, we were following the traditional Golden Dawn colour system, and accordingly painted and bordered the Judgement Key with the traditional colour assignment of Glowing Scarlet-orange (Regardie) or Red (Cicero).  Judgement is titled The Spirit of the Primal Fire and is attributed withthe Hebrew letter Shin, which is one of the three Mother letters, all of which denote that it should take on the primary root colour of Red. 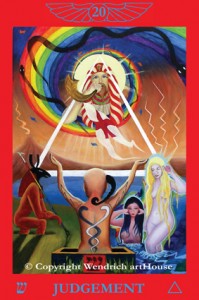 At a later stage of the project, we discovered that we were to replace the outdated primary Red with the modern true primary Magenta.  It is not an easy decision to make drastic changes to an established tradition, and at the time is was radical enough just to insist that Geburah be painted in Magenta, at least within our own workings.   It was not until we were ready to go to print with the full Tarot Deck that it was confirmed in meditation that we should make this change to the Judgement Key.  The Meditation Set of the Major Arcana had already been published almost two years prior to this, but it was important that we made the changes in the publishing of the full Tarot Deck. 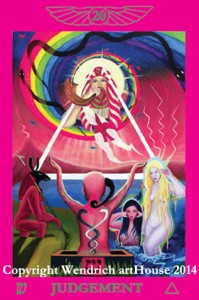 It is most interesting to note that the youth in the lower central area of the image, arising from the tomb, is Arel, or Harpocrates (Horus the Child).  Given our experience with the Horus/Geburah painting, the updating of colour in the Judgement card from Red to Magenta is a significant synchronism.

The energy of Magenta helps to bring into focus the kundalini influence within the card as Spiritual Fire, rather than Red which holds the energy of earthly fire.