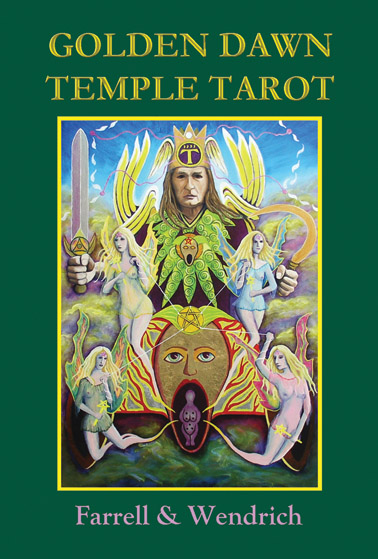 Harry and Nicola Wendrich used meditations specifically developed to engage and communicate with the archetypal forms and forces within the Tree of Life.  They then pictorially translated and incorporated the material received to build upon the framework provided in the traditional documentation, which included revising and updating traditional colour assignments.

A unique feature of this deck is the vivid borders that connect each card with its placement on the Tree of Life glyph with a visionary updating of colour attributions to include the primary colour Magenta, which was unavailable as a non-fading pigment at the time the original Golden Dawn colour theory was recorded.  The inclusion of Magenta in this deck brings an exciting, evolutionary step to the colour magic of the Tarot, and also brings an increased accuracy and vibrancy to the flashing colours used in both borders and images.

Thus the archetypal frequencies had their own input regarding the composition of the images, both from that which has been recorded and referred to since the earliest days of the Golden Dawn, to that which is communicated within our modern Temples.  For the Golden Dawn is a living and vibrant tradition, developing and enlarging, as our consciousness expands, our visual capability increases, and modern technology enhances and facilitates the revelation of things perhaps known since the dawn of antiquity… perhaps even now just coming to light. 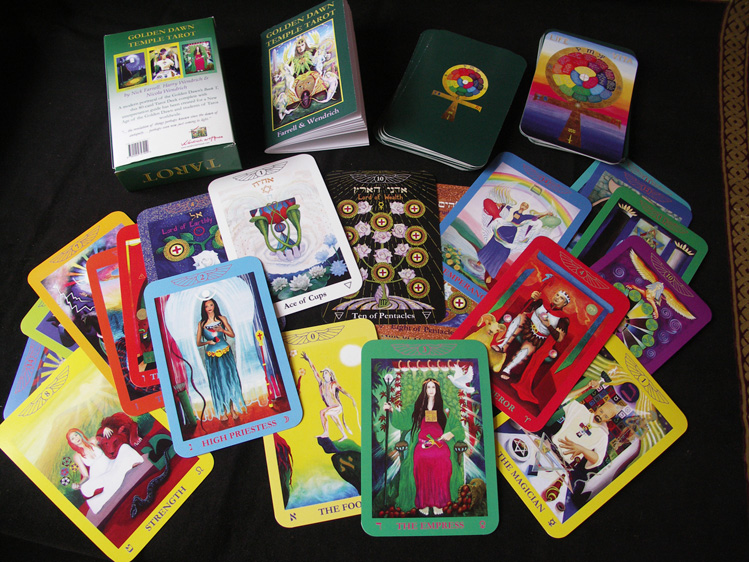 The back of the cards was originally coloured in a plain dark (racing) green.  This colour was shown to Nicola in a dream and verified in Harry’s subsequent meditation to be the colour best suited to the backing of this deck.  The colour holds an energy of a high intelligence and has the effect of quieting the mind of the user whilst also generating a grounding (earth) energy.

2017 saw a reprinting of the deck with the addition of the rose/ankh centred on the same racing green background.  This revised design helps to offset printing difficulties which can accompany solid colour printing.  Please note that all purchases from 21st May, 2017, feature the revised back cover design (see image).

Specifications: The set comprises of a boxed 80-card deck with accompanying booklet (Note that this booklet is not the handbook which accompanies the Meditation Set).  Maximum size of cards is 95mm x 135mm, with curved corners.  A silk finish minimizes glare and allows for ease of handling/shuffling.

2021 will see a new edition of this deck, and this page will be updated in due course.

Please use the contact form if you would like to be notified when the new edition of the Golden Dawn Temple Tarot becomes available to purchase.

Reviews of the Deck

The Golden Dawn Temple Tarot has been reviewed by the following (click on link to read online review):

My Kind of Magic by Brian Cormack Carr: https://www.youtube.com/watch?v=C0Q3MJoxXYo&feature=youtu.be

The Golden Dawn Temple Tarot images are now available to order as A3 and A2 Posters, from the Gallery Shop.

Printed onto high quality 190gsm paper, these heavy-weight posters with a silk finish bring the full impact of the archetypal images into your room.

Posters cost £25 and £35, which includes UK shipping.  For international destinations, a separate shipping option must be puchased from the same page.  Up to 2 posters of your choice from the full deck of images  may share the same shipping purchase.

Posters may take up to 28 days to be printed and delivered.

*A SEPHIROTHIC ODYSSEY: A Journey in Consciousness with the Golden Dawn Temple Tarot*

The book  A SEPHIROTHIC ODYSSEY: A Journey in Consciousness with the Golden Dawn Temple Tarot by Harry and Nicola Wendrich, is available from here.  Orders of multiple items to be shipped to the same address will be refunded a portion of the shipping cost if the combined weight allows for such.

The book explores the Path of Return, examining each Path and Sephira, and investigating Ain Soph and the Court Cards, including an explanation of the Elemental Signatures used within the painting of the deck, the updated Colour Theory, and additional insights gleaned throughout an odyssey of painting, writing and meditating upon the archetypal forces of the Tarot.  The Vault of the Adepti is also considered in the light of this updated colour theory.

A companion to the Golden Dawn Temple Tarot deck, this study is relevant to all students of Tarot and Kabbalah.

From the back cover:

A Sephirothic Odyssey takes us on a journey upon the Tree of Life with the Tarot Cards.  As we climb the Tree on the Path of Return, we meet the archetypal forces which shape our life experiences, and learn how their balance enables the kundalini serpent fire to rise within us in preparation for entry into deeper levels of consciousness.

The Golden Dawn Temple Tarot is examined in terms of its archetypal and astrological symbolisms. Harry and Nicola also share the updated colour theory developed within their painting of the deck and insights gleaned through meditations, including teachings from the devic realm regarding the creation process from within Ain Soph.

Through completing the journey, we perceive the link between love, light, and consciousness which enables humanity to partake in Universal Consciousness and explore extra-dimensional awareness.