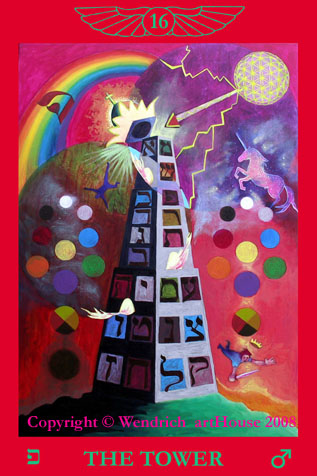 Lord of the Hosts of the Mighty

“The Twenty-seventh Path is the Exciting Intelligence, and it is so
called because by it is created the Intellect of all created beings under the highest heaven, and the excitement or motion of them.”  (Sepher Yetzirah)

When I look at the Tower card, it reminds me of my Saturn return, when in a very short time my life was totally wrecked. I remember one night screaming out in response to the emotional pain and hearing the echo through the universe in my mind. At that moment, my spiritual journey had begun…

The Tower is the path between Hod and Netzach, and is not easily crossed. The aim now is to renounce the path of the ego and call on the Higher Self to take charge of one’s life, to lead one to ones true destiny, hitherto veiled by circumstances and programming – a flower that can only open after the Tower has dealt with all the unnecessary baggage which still hinders progress.

Our vision of the card has a universal feel to it. In the background, two planets collide, creating a vesica superimposed over the tower, signifying that a higher power is overcoming a lower one. The flower of life, representing the divine matrix, shoots out a lightning bolt and knocks the crown from the top of the tower, which until now has fortified the ego. The rainbow suggests that this is taking place on seven levels of consciousness and hints at the energy of Netzach and Divine Love overseeing the destruction. In the rainbow is the Hebrew letter Peh, which means ‘mouth.’ The mouth speaks words; words split into letters, and letters are inlaid into the structure of the tower, showing that communication is needed to build it. Two figures fall from the tower – one falls on the side of the Tree of Life, suggesting that he will awaken to his spiritual path. The other falls on the side of the qlippoth, implying that he will fall deeper into the darkness of his own making. Above the Tree of Life is the Unicorn of the stars, which also reminds me of Chiron, the wounded healer who taught his pupils to find their true destiny and to fulfil their highest potential. This suggests that there is another side to the energy of the Tower, one of rebuilding a new life, more in line with the divine matrix.

The planet to which this card is associated is Mars, which has the energy to rebuild as well as to destroy.

In fact if you cross the path from Hod to Netzach you are looking at the pulling apart of your existing universe, however if you travel the path from Netzach to Hod you are seeing your higher self creating a new Universe out of the letters it sees. The path of Peh is therefore a destruction and construction.

Disaster.  Divorce.  Accidents and bad health.  Emotional pain.  Unexpected shock.  Sudden insight.  Moving home and a new path in life.  A flash of inspiration after which nothing can remain the same.  Destruction which contains within it a new universe.